21/02/2020
International missions
Civil protection
Intervention
From last 8th February to 12th February, two officers of the Belgian Civil Protection, Colonel Jan Beeldens and Captain Bastiaan Ruys, participated in an exercise which represented the second step of the course which should lead to the certification, by the EU's Civil Protection Mechanism authorities, of the Flood Rescue Using Boats (FRUB) module. The first step consisted in a visit by the European Commission to meet the members of the FRUB Team. This module has already taken part in several large-scale international exercises to be best prepared for this certification (CASCADE 2019 in Portugal last year, RIWATEREX in Spain in 2018, Sørland in Norway in 2016, …). 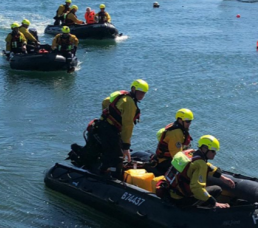 These past years, the Civil Protection has set up a FRUB module so as to carry out search and rescue operations to evacuate people and animals in flooded areas or, also, to supply the isolated victims with first necessity goods in the event of serious flooding..

During the exercise, which was organized in Slovenia in the form of a table-top, our representatives demonstrated in a detailed way how the Belgian Civil Protection FRUB capacities could fall within the scope of the European civil protection reserve (formerly "voluntary pool"). This reserve is comprised of the resources of 33 participating States who are ready to be quickly mobilized in a devastated area, as soon as a disaster occurs and that an incoming call for help is received through the European Civil Protection Mechanism..

When returning from Slovenia, Captain Bastian Ruys told us what his first impression was of the exercise in which he participated: "What I will remember about this exercise is the enthusiasm shown by all the participating teams to complete their mission. And, whereas each team has its own way of working, this kind of encounter makes it possible to learn from the other teams and to build a common way to respond efficiently and effectively. Such an exercise wouldn't be possible without the support from the European Commission and it can be regarded as the best form of training possible to deal with large-scale disasters."

The third and final step towards European certification of the Civil Protection's FRUB module will be taking place in Serbia at the end of April. The entire module, made up of 6 boats and 32 people, will be deployed over there in the framework of a large-scale exercise. This planned activity will be the moment for the European experts to deliver a final assessment on whether our FRUB capacities meet the highest international standards and are able to work together in an integrated manner with the local authorities, with other European teams and international coordination structures, in the event of an intervention abroad. In case of success, the Belgian Civil Protection's FRUB module shall be acknowledged as a high-quality intervention team which can be deployed to provide emergency assistance at the request of a country affected by severe flooding.

By integrating its FRUB module into the EU Civil Protection Mechanism, Belgium will strengthen its emergency response capacities and thus make a major contribution to European solidarity when foreign countries are hit by disasters. This solidarity shown by the European civil protection organizations does indeed constitute an important pillar of our security policy. It guarantees us, as well as the other European countries, that we can always rely on adequate and high-quality emergency aid even in the worst crisis situation.